Man Pants, conceptually, encompasses more than just pants. More accurately, it is a clothing philosophy centered upon the physiology of the average man.
Consider the limitations of the conventional male outfit: pants, a belt, and a shirt.

1) The belt is generally working against both gravity and the shape of the typical male. The weight of the belt and pants tends to pull the belt down. The shape of the stomach is also pushing down on the belt. 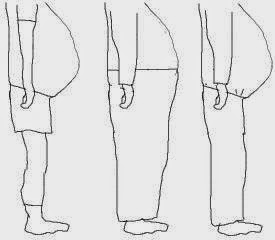 2) The circumference of the so-called waist is greatly influenced by the size of the stomach. Men generally accumulate fat in the stomach, not the thighs. Pants are sold by waist size. This means that large men either have to buy large-waisted pants, which are too large for their thighs, or normal-waisted pants, which they have to wear unnaturally low, below their belly. Either option looks ridiculous. 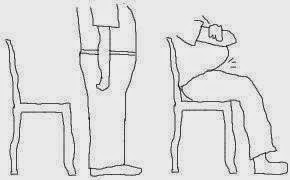 In the Man Pants system, the dividing line between the upper and lower body is lowered and reshaped. Instead of a perfect circle that bisects the body latitudinally, you have a line that meanders over the hip bone and below the abdomen. The entire stomach becomes more prominent (Man Pants embraces the stomach). 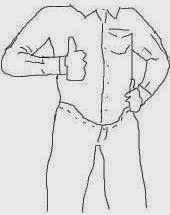 Optionally, a cummerbund-like garment can be worn, to a more formal effect. 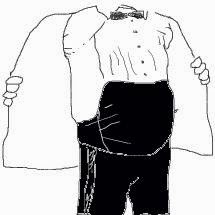 Posted by Max Requenes at 8:15 PM No comments: